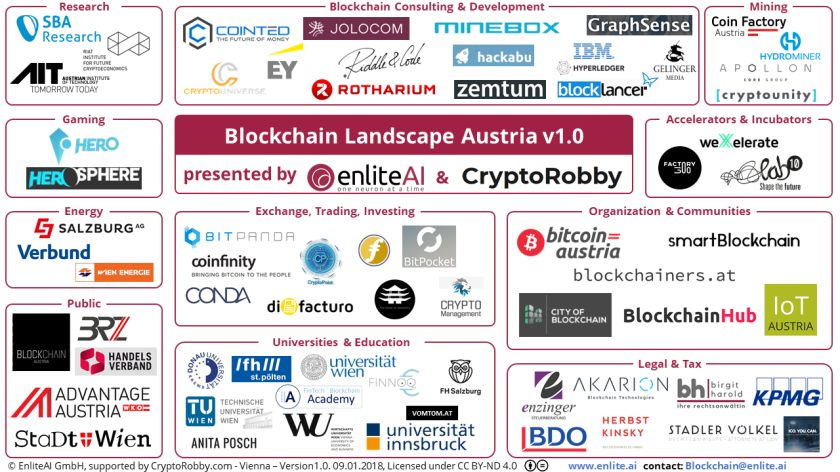 EnliteAI is currently developing an AI-powered market intelligence platform with the vision to automatically map innovation ecosystems, across industry verticals and countries.

On top of Austria being a country of music, she has some promising  excellent startups, excellent blockchain experts and true crypto enthusiasts to offer.

Would you like your company or institution to be included in future updates?
Simply send an email to blockchain@enlite.ai

A healthy blockchain eco-system not only requires developers, finance experts and researchers but also mentoring and finance from seasoned entrepreneurs. Fortunately, there are accelerators and incubators across the country, often linked with co-working spaces and local organizations.

Companies in this category cover a wide range of services – from developing blockchain-based solutions up to business modelling and ICO support.

Austrian utilities were fast to implement Etherium-based smart contracts, often in cooperation with local universities or research facilities. Given the current momentum it’s just a matter of time until we will see the first fully operational energy blockchains.

This category focuses on exchange of crypto currencies, Crypto teller machines, trading and investing in blockchain projects and ICOs.

The House of Nakamoto

Gaming company Herosphere was the first Austrian ICO ever – raising 2 Million EURO with Herocoin. Starting from April 2018 the first implementations of Herocoin should be available to the public.

Due to the high activity in the Blockchain space many law firms have experience in setting up and supporting ICOs.

Companies in this category offer either mining hardware or mine for cryptocurrencies.

Austria has a very large Blockchain community with more than 10.000 Blockchainers – with local organizations in each province.

Activities from public players is strong in Austria, both in form of initiatives, as well as in pilot projects like open government data.

Austrian universities conduct Blockchain both economic and technical research. At the end of 2017 Vienna’s University of Economics and Business launched the Institute of Cryptoeconomics, which will focus on new business models. In addition a number of private institutions offers education and trainings, covering blockchain basics up to investments, development and business case modelling.

Vienna University of Economics and Business

Disclaimer: We are not involved with any of the companies and organisations listed in this landscape.